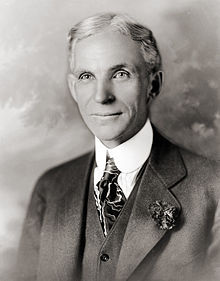 Born on July 30, 1863 in Dearborn, Michigan. When he was 16, Ford left home to apprentice for a machinist in Detroit for three years. In 1891 Henry Ford became an engineer for Edison Illuminating Company, giving him the income to invest in his vehicle creation. The investment paid off in 1986 when he completed his quadricycle, his first self-propelled vehicle. He developed the Ford Motors Company in 1903 as chief engineer, going from two to three cars a day to a full fledged, assembling factory in 1910 producing millions of cars in a year. Ford died on April 7, 1947. He was 83 years old.
Powered by